The Library and Lieutenant Chevalier

On Saturday I dived deep into the past of Point Chevalier. It’s taken a while for me to surface, but I’m beginning to know the place.
So I’ve heard the stone crusher at Meola Reef and the emergency siren at the Oakley Mental Hospital. I’ve eaten hot chips from the Glamuzinas’ fish shop, stained my fingers gathering blackberries from the paddocks, smelt the fennel growing wild, and come home filthy from the mudflats. I’ve danced at the beachside Dixieland Cabaret of the ’30s and bowled at Hallyburton Johnstone.

I’ve been right there: catching the tram to Hall Corner, rolling jaffas down the Ambassador Cinema’s sloping floor, fishing for piper off Piper Rocks, fossicking at the tip, picnicking with the Watersiders at Coyle Park. And of course I’ve spent time at the library — all part of the Point.

“It began with a window”, writes Peter Wells of his own experience at the Point Chevalier library. “It was an old-fashioned sash window: two oblong panes looking up into the sky. I was lying on my back, on the floor. The librarian was reading. It was story hour.” He’s exploring one of those epiphanies we all have in childhood. His is about “the power of stories, the luminosity of written language... an aperture to another world”.

This is from Wells’s award-winning memoir, Long Loop Home. It seems a shame that although you can borrow it from Auckland Libraries, it’s not available — or at least not right now — at Point Chev, the place that’s a focus in its opening chapter (“The Point, and How I Got It”) and in many subsequent pages.

Mind you, his library isn’t there either. I don’t mean that experience and perception are unique to the individual (though they are), but that he writes of the second Point Chevalier Public Library. Today it’s in its third incarnation. Or its fourth, if you count the foyer of the Ambassador Cinema, where the institution resided when the latest building was under construction in the mid-1980s.

The library reincarnated
The purpose-built ‘new’ library, on roughly the same street corner as numbers one and two (the corner itself has moved), counters the sobriety that public buildings used to manifest: dark coral and bright lime are shades the city fathers might be shocked to see separately, let alone together.

One feature I haven’t seen in other libraries is the conversation pit that’s obligatory in a retro home but that here— given local Lions Club sponsorship — should be called the Lions Pit. It boasts picturebooks and plenty of space for kids (or cubs) to sprawl, crawl and possibly growl. The colourful items suspended from the ceiling on one side are alternating Chinese lanterns and Polynesian lei, mixing the New Year celebrations of one culture with the recent Pasefika festivities of another.

What of the earlier libraries? The first was a hand-me-down. It originally served as the Remuera Road Board office, then the Remuera library from 1915 to 1926. That year, Auckland city councillor Ellen Melville not only opened Remuera’s smart new public library but also re-opened part of its old library — relocated at the corner of Great North and Point Chevalier Roads. The appearance of this community resource followed petitioning by 400 Point residents.

Within 12 years, Point Chevalier outgrew the building just as Remuera had. It was delivered into the care of the Post Office, which issued stamps rather than bulky books, and the Coronation (George V) Hall next door became the library. That is Wells’s “old drill hall, with its tongue-in-groove porch, its protective veranda, its soaring roof”.
One book at a time
Others write about the library/hall and its predecessor, too: “I made a daily trip... as we were only allowed to borrow one book at a time”, says longtime resident Valerie Wood. (These days we’re allowed 35.) She is one of 60 people reminiscing in in Point Chevalier Memories: 1930’s–1950’s.

Though this 2009 collection is a local library initiative, it played hard to get when I went to borrow it: in the whole Auckland Libraries system, five lending copies were out on loan, five were for library use only, and one was missing. At Point Chev, not even a reference copy was on the shelf. I had to ask to see it, I gather because it tends to go AWOL. (It must be in hot demand for school projects.)

I spent hours reading it — it’s the source of the sensory perceptions in this post’s opening paragraphs, not to mention the news that some famous Kiwis spent their early days at this suburb, home now to millionaires’ mansions as well as state houses and bungalows. They included runners Peter Snell and Murray Halberg, cricketer Bert Sutcliffe, broadcaster Geoff Sinclair, his historian brother Keith, rogue politician John A Lee and bookwoman extraordinaire Dorothy Butler.

Inadvertently, I also found a book that was lost. The self-checking machine wouldn’t let me borrow A Building Known as Carrington. “It’s been reported missing,” said the librarian. “Thank you for finding it!” This backgrounder on the former mental hospital (variously Whau Lunatic Asylum, Auckland Mental Hospital, Oakley, Carrington) that’s now part of the polytechnic is a slip of a thing but one fact speaks volumes:

In the five years between 1952 and 1957, 500 door knobs were fitted. Patients now opened doors which had once been opened only by institutional keys.

A book doesn’t have to be big to be informative. It doesn’t even have to be up to date. Thanks to Rangi-Mata-Rau: The Story of Pt. Chevalier. 1861–1961, borrowed from the Central Library’s basement, I know that “Target Street” (now home to the retirement complex Selwyn Village) is so named because the imperial troops had their rifle range there, supervised by a certain Lieutenant Chevalier — and that in the early 1860s the way to the beach, Point Chev Road, was Barracks Street. [Click on “comments” below for
Timespanner’s correction.]

The Point of no return
Here the author takes on a confiding tone, even a gossipy one:

Just at this time, the beginning of the Waikato War, two strange Maoris appeared at the settlements and almost overnight the local Maoris disappeared, leaving their canoes on the beach, and several on Pollen’s Island. They never returned to the Point and the canoes were there many years later. One Maori known to the whites as Te Whare Bob, who had a deformed leg, was seen at the Gate Pa, Tauranga some years later. It is believed that they joined forces with the Waikato rebels.

In Rangi-Mata-Rau (from the Maori name for the beach) we also read that early in the twentieth century, the clifftop by the sea had a quarantine hospital — for the smallpox epidemic, among other things. There’s no word on how many entered or left, on foot or by stretcher, but the institution at the future Coyle Park didn’t last. Auckland Hospital Board had “never been favourably disposed” towards it “as it was in such close proximity to one of Auckland’s favourite beaches”.

The past is present in Point Chev, if we think about it. Caffe Ro, where Carol and I enjoyed lattes after our library visit, would have had sawdust on the floor and meat cleavers in frequent use during its former life as the Pt Chev Road butchery of Len Fearon. Opposite is the (re)tired iron archway announcing the Hallyburton Johnstone sports facilities, opened in 1927 after bowling enthusiasts agreed to pay the impressively named farmer an annual sum that would add up to their eventual ownership. The Point’s bowling and tennis clubs remain there today, with more modern signage.

Turning full circle
Some things turn full circle. Mr Kircher’s bike shop may have long gone but rode — “a haven for the more discerning cyclist”, according to one listing — now sells its shiny new contraptions on the corner where a furniture shop offering “draws” traded for years. In Point Chevalier Memories, senior citizens comment on the recent return of younger people and families to the suburb. “It is funny how things go in cycles”, Maureen Prouse says.

This blog has reached sign-off on Point Chev, but the place hasn’t finished with me yet. I’ll seek out Keith Sinclair’s anthologised ‘Ballad of Meola Creek’ and I’ve reserved his autobiography, Halfway round the Harbour. After much trial and some error I’ve also used my library membership to download ‘Point Chev Boys and the Landscapes of Suburban Memory’. This article, published in an international journal about geography, compares Sinclair’s childhood experience with that of Peter Wells. The differences seem remarkable.

As she nears the end of her 17-page exploration, the author Annabel Cooper writes, “Places are works of the emotions and the imagination.” So now you know (and I’m only half joking): the Point Chevalier that you’ve read about here is all made up.

Further reading
Auckland Libraries’ Heritage Images Online (the earlier libraries are pictures 7-A11816 and 7-A11641);

Peter Wells’s blog;
‘Point Chev Boys and the Landscapes of Suburban Memory’, Gender, Place and Culture, 16:2, April 2009;
‘Point Chevalier: A Walk through Our History’ — pamphlet available from the local library; 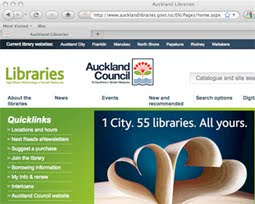